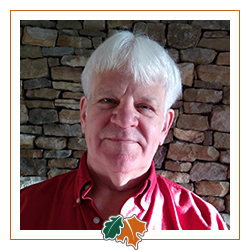 The Garrett Lakes Arts Festival was founded in 1986 and Our Town Theatre was created in 1997. Ben Sincell was GLAF’s design and technical director for 20 years and held the same role with Our Town Theatre for 16 years – holding both roles simultaneously for nearly a decade.

And neither of those activities were even Sincell’s day job. The Garrett County native spent 32 years on Garrett College’s faculty, building its theatre program as well as teaching communication courses.

Sincell will be honored for both his academic and community achievements at Garrett College’s 50th commencement exercises on May 21st with the awarding of professor emeritus status. The Garrett College Board of Trustees voted unanimously to honor Sincell and retired Professor Beth Luers, who were both unanimously recommended by the College’s faculty.

“He would roll up his sleeves and work shoulder-to-shoulder with students, pounding nails and painting sets,” Dr. Mitchell said of Sincell. “No one was more knowledgeable or skilled at building sets and producing entertaining and engaging theatre productions.”

Tim Foster, a math professor at Garrett College who was also one of Sincell’s students, also noted Sincell’s set-design talents.

“Ben was a master set builder and lighting genius,” said Foster, who met Sincell on his first day as a student at then-Garrett Community College. “I think Man of La Mancha was Ben’s best. The actors were amazing, but the stage actually made you feel as though you were in medieval Spain.”

Sincell also believes that Man of La Mancha – an adaptation of the 1965 Broadway production inspired by the 17th-century novel Don Quixote – was one of his most memorable on-campus productions.

“That was a very fancy, extensive set,” recalled Sincell. “It just seemed like that really sparked a lot of interest, not just in terms of county residents, but in terms of student interest. It let the students and the audience see the possibilities of what I think was good theater and, maybe, what could be done if we were finally able to get a performing arts center.”

Sincell said the Performing Arts Center at Garrett College – scheduled to open in late spring – is fulfillment of a long-held dream of the local arts community.

“I served on at least 15 – maybe more – committees in my time, where we said, ‘We’re going to build a theatre.’ They never went anywhere; always fell apart for one reason or another,” said Sincell, who indicated the design for the new performing arts center should more than meet community needs.

“I saw what was being planned and it looks good to me. [At the beginning of the project] I said the most important thing was getting an architect who understood designing performing arts centers, and they did that,” said Sincell, referring to DLR Group, which was the architect for the new PAC.

Sincell said his own theatre background grew out of a lifelong love of magic.

“I had the opportunity as a junior and senior in high school to work as an assistant to a professional magician,” said Sincell, himself a performing magician for nearly four decades.

Sincell also credited his parents – the late Robert Sincell and 94-year-old Hannah Sincell – with supporting his interest in the arts.

“When we were being raised, they took us to see a lot of different shows,” recalled Sincell. “My mother in particular supported my interests. She got me a drum set when I was younger – she might have come to regret that at some point in time. My uncle, Dan Wagoner, was a world-famous modern dancer. It [performing arts] has always been a part of our existence to some degree.”

After marrying Beverly, they spent a year in New York City before moving back to Garrett County. In 1980, they began their family, raising three children: Daniel, Angie and Miriam. They all helped their father with productions, both off stage and on stage.

Sincell then worked for The Republican, at the time a Sincell family-owned newspaper, where he saw an advertisement for a communication and theatre instructor position at Garrett College. Joining the GC faculty in 1981, he soon found the most challenging aspect of his work was using a space designed as an auditorium to serve as a theatre.

“It was designed by somebody who didn’t know theatre at all – it encompasses just about everything that could be wrong with a stage,” said Sincell, who earned a Master of Fine Arts (MFA) in Theatrical Design from West Virginia University in 1990.

“That stage offered all kinds of challenges, including lighting and flooring,” said Sincell. “One of the biggest challenges was to figure out where to keep stuff – where do things live until they’re used, and where do they go after they’re done?”

“Most of the scenery had to be something very easy to get on stage, or lighting had to be used in different parts of the design to tell the story. Those were huge challenges,” said Sincell. “With limited storage space at the college, I had good friends in Mountain Lake Park who lived in a huge Victorian home and we stored lots of stuff there.”

Foster – who had Sincell for an instructor in communication/speech – said Sincell “not only taught speech but also life lessons in his class.”

“He wanted students to learn to respect each other even if we had different points of view,” said Foster, who said he tried to “emulate Ben’s style of teaching” when Foster returned to Garrett College as a faculty member.

“He was caring, and he made class relevant and fun,” observed Foster.

Sincell said GC athletes – erroneously thinking theatre was “an easy ‘A’ ” – signed up for theatre in droves, eventually earning an appreciation for that discipline.

“They quickly found theatre was hard work, but fun – and it functioned very much like a team, with a head coach, assistant coaches, players and a support staff,” said Sincell.

Sincell said the development of the new PAC provides an opportunity for thoughtful consideration of appropriate academic programming.

“With the space that’s being developed it would certainly lend itself to the development of tech and design aspects,” said Sincell. “Design and tech could be a main focus and the student body could be used for actors.”